When a hijacked war machina turns on the crowd at a meeting of the Auctoritas Magicae, prodigy apprentice Jules Nimri deploys his newly-developed “combat alchemy” to bring down the automaton—but only after the construct has slaughtered dozens. In the aftermath of the tragedy, accusations fly, rekindling an ancient interfaction feud that could plunge the arcane world into war.

Meanwhile, in nearby Chicago, young ex-mage Rory Navarrete is swept back up in the esoteric life he left behind when he stumbles on a coven of apostate mages in the middle of a ritual human sacrifice. After striking them down with his own forbidden magic, Rory rushes the victim to the Enclave to seek treatment for a supernatural injury—only to be clapped in irons the moment he sets foot on premises.

Jules negotiates Rory’s release, tentatively reviving a childhood friendship that ended in betrayal. The star-crossed odd couple join forces to investigate the murderous apostates—only to find clues of a deep conspiracy, and a malignant magic long thought extinct. Their discovery could prevent tensions from boiling over, but finding proof is no easy task, and time’s working against them, as Hunter Lockwood, scion of a potent magic dynasty—and Jules’s depraved ex-betrothed—stokes the fires of separatism to fuel his own political rise, pushing the alliance toward the brink much faster than anyone could have imagined.

Those Who Create and Destroy is a switchblade-and-sorcery e-novel by yours truly and Emrys Webb set in the Form & Void multiverse. It features a queer cast, apocalyptic themes, and aesthetics inspired by action-adventure anime series  like Fate/Zero, Neon Genesis Evangelion, Fullmetal Alchemist: Brotherhood, Devilman: Crybaby, and Arcane: League of Legends.

If you enjoy our work, you can support us on Patreon! Patrons receive rough draft excerpts/cut scenes from all our series, exclusive short and serial fiction set in the Form and Void multiverse, and early access to Parts II and III of Those Who Create and Destroy as they're finished.

Those Who Create and Destroy Part 1.zip 16 MB 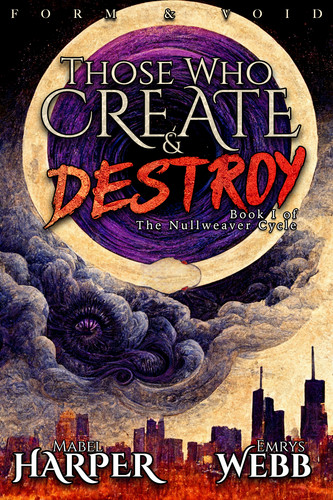